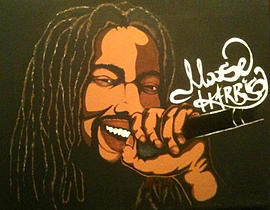 Anthony “Moose Harris” Daniels stumbled into a new opportunity for himself, and hundreds of other Artists and Bands.

While on a networking trip to the studios of KSCL 91.3 FM (Centenary College Radio) in Shreveport, Louisiana, Daniels was randomly asked if he would like to create and host his own Radio Show. Daniels said “yes” before even thinking about it! Urban Flosarus hit the airwaves for the first time on August 18, 2010 at 10pm.

A menagerie of music backed by the “straight forward with a twist of fun” voice of Moose Harris is what thousands of listeners have been entertained by for  years. Moose has been credited with opening the ears of listeners to new artists from around the world. To date, artists submitting music to Urban Flosarus has come from over 35 American States, and 13 other countries, introducing music coming from Independent / underground Hotbeds such as New Orleans, Atlanta, Buffalo, Seattle, and from far off places as London, Tokyo and New Zealand. A number of artists have come on the air with Moose to provide another form of connection with the listener. Artists like Dee-1, Big Mike, Marcel P. Black, & Lyriqs Da Lyrciss  can credit Urban Flosarus as a springboard to bigger accolades. The show also shows its cooperation with the Independent / Underground Community by interviewing representatives of the culture that Urban Flosarus presents every week.

Anthony Daniels always knew he wanted to be involved in music in some form of fashion. Growing up immersed in music, Daniels started his path in music, playing various instruments in his hometown of New Iberia LA. After he was accepted to the University of New Orleans at eighteen years old, Daniels began studying Jazz under the legendary New Orleans musician and Jazz vocalist Ellis Marsalis.

Although, Daniels sought the fame of being a musician, radio would eventually become part of his life.

It was those experiences that lead Daniels to know that if music never worked out, he would have a second career choice in hand.

After 5 Solo Albums, 12 Production Credits, and Urban Flosarus broacasting in multiple states and countries – with more on the way – the future seems as fun in today as they were in the days of just a cassette recorder.

When it comes to Entertaining, Enlightening, Introducing, and Educating, no one in Syndicated Radio is doing it like Anthony “Moose Harris” Daniels & Urban Flosarus.

Type In Your City For Weather

Before It's News | People Powered News